Photo by Inactive. on Pexels.com

Did you ever “find” animals and shapes in the clouds when you were a child? My father and I used to have such fun doing that. Later in life, I tried identifying optical illusions, searching for images that were not immediately recognizable. I confess, I don’t always discover the hidden objects as quickly as others. I have read that “seeing” what is hidden within the “visible” is a function of our perception, our ability to respond and interpret sensory information.

In Scripture, we learn that God performed miraculous healing of physical eyes on a number of occasions so people could see. But, He also opened the eyes of humans to perceive things which were, at first, unseen in the natural. In one instance in 2 Kings, God encouraged the Israelites of the spiritual armaments He had prepared to protect them.

In 2 Kings 6:16, the Lord encouraged the servant of Elisha in this way. The king of Syria was making war against Israel, and had sent a great army specifically to capture Elisha. “And Elisha prayed and said, “Lord, I pray, open his eyes that he may see,” (2 Kings 6:17 KJV). The servant had seen the physical presence of the enormous threat against them … with his own eyes. He was afraid of what seemed to be Elisha’s certain death. But God intervened and opened the servant’s eyes. He suddenly saw God’s army, horses, and chariots of fire all around Elisha, a compelling counterforce.

God allowed the vision, the spiritual revelation, so they would regain courage in face of a seemingly insurmountable Enemy. At first, they had only seen with their physical eyes, and the threat was real. Yet, there was more provision behind the scenes. God had His invisible army, even more powerful than the Syrian forces prepared to defend His children.

We live in a physical world, yet as humans with a mind, body, and spirit nature, why should we be surprised that there might be more to “see” in any given circumstance? Are we looking for God’s spiritual viewpoint when we face our trials and “insurmountables”? We often cannot see more than the present circumstances, and when those are painfully difficult, we lose heart.

King David prayed to the Lord: “Open my eyes that I may see wondrous things from Your law,” (Psalm 119:18 KJV). Maybe we would be wise to pray the Lord open our eyes so we can see things in a dimension that God sees. What might we be missing by not praying that prayer? Maybe we need courage in times of attack. Perhaps, we don’t see the invisible forces He has already provided for us when we think we are alone.

God made it clear that He wants a relationship with us. He loved us while we were yet far from Him, out doing our own thing, apart from His will. How do we know this?  He sent Jesus, His Son, to take the penalty of our sins so our most perfect, loving God could once again walk with us and talk with us as He had originally planned. After that, it was left to us to choose to align our lives by asking forgiveness, and accepting His free gift of relationship. We can be confident in our prayers that God is for us. He chose not to stay apart from us, and made a way for us to have relationship again after sin had, by its very nature, separated us from His Perfect Love. 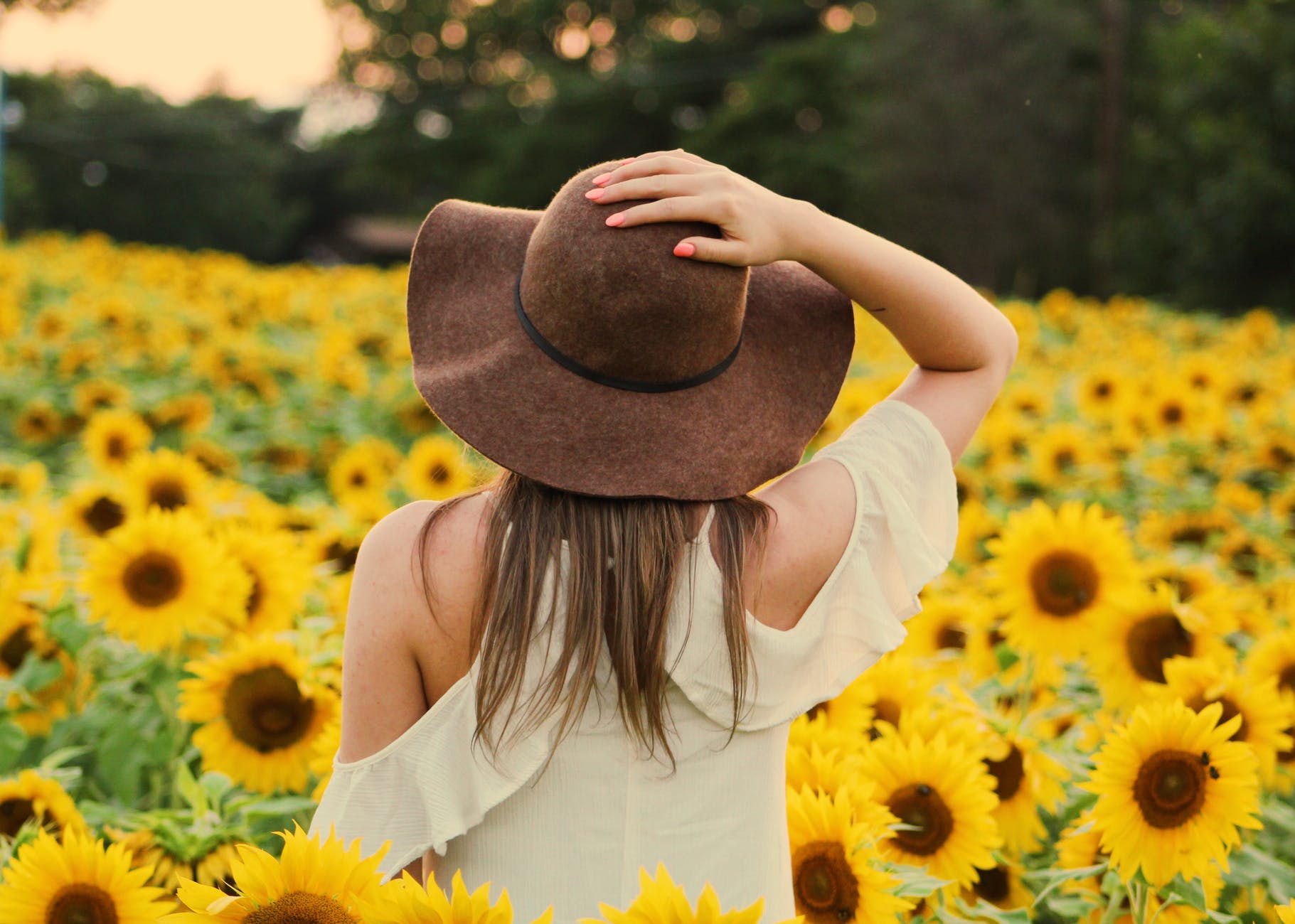 Photo by Noelle Otto on Pexels.com

While visiting our seven-year-old Kansas grandson recently, Max excitedly burst into the house carrying a bouquet of sunflowers … for me! He had convinced his mama to buy them for me when they were shopping. The uniqueness of this spray of flowers was that each large flower head was drooping, bowing down from its stem, rather than standing upright.

Maxwell explained with confidence that they were simply being sunflowers which are always looking for the sun. Of course, I graciously accepted his gift with an exclamation of his thoughtfulness. His daddy brought some filler plants in from the yard, which somewhat improved their countenance.

In reflecting on the downcast sunflowers, I was taken back by the image above of the girl gazing in the opposite direction. If the flowers symbolically seek the Sun, shouldn’t we also seek the Son, Jesus, for our Source? Yes, of course. There are times and seasons when we may be tempted to think we’re capable of handling life all on our own. All is well, finances are secure, health is good, and we have done it all ourselves. We may pat ourselves on the back and expect our fans to applaud because we’re successfully sailing along in our strength. Who needs God anyway, one might ask?

But, often that isn’t the way life works. You know that. I know that. Sometimes, nothing seems to go our way. So in those times we can misguidedly plunder through our days, lacking the Son in the messiness of life, lacking His strength, peace, and His Omnipotent wisdom for guidance. Scripture is replete with advice for living a complete and satisfying life, in the good times and bad.

In Hebrews 12:1-2 we are reminded to “… fix our eyes on Jesus, the author and perfecter or our faith, who for the joy set before him endured the cross, scorning its shame, and sat down at the right hand of the throne of God.” Yes, indeed, as the sunflowers seek the sun, we are advised to “fix our eyes ….” Where? On the Son.

Psalm 34:5-6 tells us that “Those who look to him are radiant; their faces are never covered with shame. This poor man called, and the Lord heard him; he saved him out of all his troubles.” More evidence that when we don’t look to ourselves, in our good old American independence, we will become radiant. We will be the sunflowers of humanity, with faces tilted upward with dignity, grace, and assurance. If you are feeling downcast today, pick up the Bible, and look to God’s Word to you. He will be your strength and radiance.

I don’t know about you, but I need to seek the light of Christ … daily. Whenever I try to go it alone, I quickly become the wilty-headed sunflower, looking at the problems at my feet, instead of the Son’s LIGHT as my Source. I encourage all of us to not lose sight of God’s amazing gift, even in the hard times. When we “look up,” we will find the resources necessary to finish the race victoriously. Not because of our own tremendous capabilities, but because of our loving God and Provider. Look up to the Son, beloved children of God, and become all you are meant to be.

“But if we walk in the light, as he is in the light, we have fellowship with one another, and the blood of Jesus, his Son, purifies us from all sin,” 1 John 1:7.